skip to main | skip to sidebar

Musings of a flower child: Panorama of Savitri

19 hours ago - What came as a surprise to me was Aurobindo having picked up her story to create poetry which he wrote, rewrote for almost 50 years. What is even more ...
Aurobindo has given an entirely unique fresh perspective to the entire story of Savitri which is very relevant to the present times where humanity stands at a crucial junction and is struggling to go through ascension.
After reading this book the things which are impressive is the way Aurobindo has taken Savitri s character to an altogether different sublime level. The narration by Pandit is simple and yet classy.

This yoga implies not only the realisation of God, but and entire consecration and change of the inner and outer life till it is fit to manifest a divine consciousness and become part of a divine work. This means an inner discipline far more exacting and difficult than mere ethical physicalausterities. One must don enter on this path, far vaster and more arduous than most ways of yoga, unless one is sure of the psychic call and of one’s readiness to go through to the end, Sri Aurobindo

Letters to the Editor sent to WEEK, THE - Mother,s Birthday ...

"The Mother's Force is not only above on the summit of the being. It is there with you and near you, ready to act whenever your nature will allow it. It is so with everybody here"

Mirra Alfassa, known to her followers as The Mother, was the spiritual collaborator of Sri Aurobindo. Her full name at birth was Blanche Rachel Mirra Alfassa. She was born in Paris in 1878. She came to Sri Aurobindo's spiritual retreat on 29 March 1914 in Pondicherry, India. Having to leave Pondicherry during World War I, Finally she returned in 1920. After 24 November 1926, when Sri Aurobindo retired into seclusion, she founded Sri Aurobindo Ashram with a handful of disciples.
She met an Indian in Paris who advised her to read the Bhagavad-Gita, taking Krishna as a symbol of the inner Divine. She later said that when she saw Sri Aurobindo for the first time, she recognized him as the person, whom she had earlier referred to as "Krishna".
Sri Aurobindo considered Mother to be  an Avatar of the Supreme Shakti (an incarnation of the Mother Divine ). In 1927 he wrote, The One whom we adore as the Mother is the Divine Conscious Force..
After Sri Aurobindo death in 1950, till her own death in 1973, Mother regularly met her disciple Satprem, with the content of these conversations published in French and English in the 13-volume book The Agenda.
From 1962, she continued to give public Darshans four times a year from an upstairs balcony, at which thousands of devotees gathered. Her religious experiences have intensified through the later 1960s and 1970s.
In 1956 she established the Sri Aurobindo Ashram, Delhi Branch, together with Surendranath Jauhar, and Mother's International School. In 1968 Alfassa founded Auroville.
After her death on 17 November 1973, her body was placed in the newly constructed Samadhi structure: a vault in the courtyard of the Ashram where Sri Aurobindo's body had been placed in 1950.

Reading of few pages from the Epic, Savitri (written by Sri Aurbindo) is mandatory in every function, Vibha ji read the same., and an appropriate  Bhajan was sung in praise of Mother by Ashmi Sharma in her harmonious, melodious voice, Madhu Anjali,  highlighted the importance of the day to devotees and also read  the inspirational prayer written by Mother herself. Later the devotees were treated to outstanding Bhajan session by talented and gifted students of  of Jaswant Modern School, in presence of their Principal..Meenaxi Gandotra. Audience listened in pin drop silence. Last Bhajan “Om Namo Shivay" was the very best.

As is the ritual, on all Darshan days,  everyone present enjoyed the Langar (Community eating), aptly managed by Anju Aggarwal, Ashmi Sharma, Rajlaxmi Dubey & Vibha Aggarwal.

"There is one divine Force which acts in the universe and in the individual and is also beyond the individual and the universe. The Mother stands for all these, but she is working here in the body to bring down something not yet expressed in this material world so as to transform life here -- it is so that you should regard her as the Divine Shakti working here for that purpose. She is that in the body, but in her whole consciousness she is also identified with all the other aspects of the Divine"

https://books.google.co.in/books?isbn=1621481379
Robert McDermott - 2015 - ‎Preview - ‎More editions
... the lens of their specific religious or spiritual commitment, devoted followers of Rudolf Steiner tend to see every topic, every ... But spirituality disconnected from a religious institution can be elitist and invisible: No one has to show up to do the ...

Sri Aurobindo did not write much about the subtle physical. Usually it is listed along with the other planes and it doesn't even get a sentence to itself. Here in  ...

18 hours ago - Videos and Talks from Sri Aurobindo Society, Singapore. For more information visit us @ https://www.facebook.com/SriAurobindoSocietySingapore/

22 hours ago - Sri Aurobindo says " How shall we recover our lost intellectual freedom? By reversing, for the time being, the process by which we lost it, by liberating our minds

12 hours ago - She was Joya Mitter, the guiding force behind Sri Aurobindo Institute of Culture. She transformed it from a fledgling organization into a very respected institution.

10 hours ago - Most importantly, Dr Karan Singh has quoted from a speech delivered by the great nationalist leader, Sri Aurobindo Ghosh, to the students of the Bengal  ...

We, the Barbarians: A spiritual examination of the hatred ...

2 hours ago - For this, I lean on Indian spirituality, best articulated in the words of Sri Aurobindo, which effectively captures evolution into this statement: into matter burst life,

The Mental World and Its Relation to the Vital and Physical ...

7 hours ago - Sri Aurobindo observes that beyond the physical worlds and vital worlds there are also mental worlds, where the operative principle is that of Mind. “Mind there ...

The Sunlit Path - Sri Aurobindo and The Mother - Facebook


21 hours ago - The Sunlit Path - Sri Aurobindo and The Mother. 1989 likes · 227 talking about this. The Divine's sacrifice is the descent of the Divine into the...

23 hours ago - Sri Aurobindo & The Mother The Advent of a New World A new permanent exhibition will be on display at Visitors Center, 1st floor. The inauguration [...]

The Idea of India is Not so Brittle as to Crumble at the Echo ...

11 hours ago - What did Aurobindo say about this? Aurobindo touched upon 'the secret of the difficulty in the problem of unifying ancient India'. And he cited ancient texts. 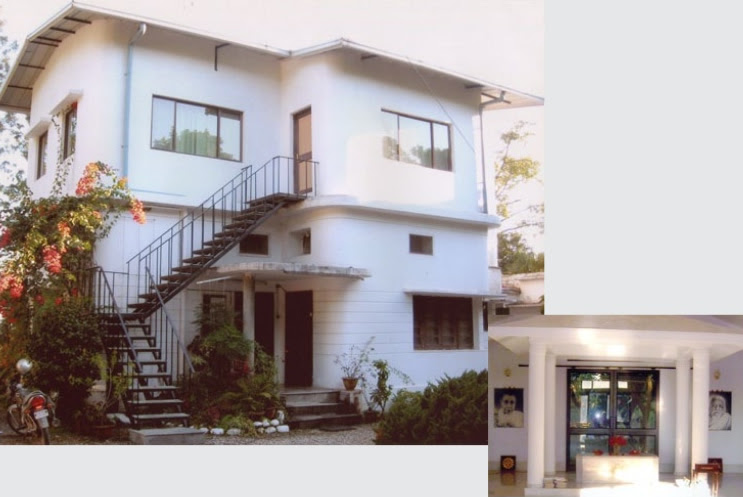 Posted by Tusar Nath Mohapatra at 11:41 AM No comments:

www.aurovilleradio.org/tag/yoga/
Sri Aurobindo did not write much about the subtle physical. Usually it is listed along with the other planes and it doesn't even get a sentence to itself. Here in  ...

Savitri, Book II, The Book Of The Traveller Of The Worlds, Canto II, The Kingdom Of Subtle Matter, Part 1, Pages 103 – 107
King Aswapathy is climbing Nature’s Giant Stair and the first place he comes to is the Kingdom of Subtle Matter This is the plane in the creation which Mother and Sri Aurobindo usually call The Subtle Physical. It is the world closest to the physical, material world in which we live every day. This world is the place where the soul first “touches ground” when it returns from its rest between lives. Here it “puts on matter’s cloak”, and when its life is over, it sheds mortality’s cloak on its way back to becoming pure spirit to wait for its next life. It is the ground of nature’s worlds and everything that happens here has its origin there. Sri Aurobindo did not write much about the subtle physical. Usually it is listed along with the other planes and it doesn’t even get a sentence to itself. Here in Savitri, Book II, Canto II, we have his most complete description of the Subtle Physical.

21.02.2016
Dear Friends, Today is The Mother’s birthday. This is a Divine Birth. She had come to manifest a New consciousness and create a new World. The world is moving towards that future unknowingly and by presser and struggling with the past. Everybody should know this spiritual fact of the world and try to be part of this change. This is the permanent solution of all problems.
Today I am thinking more on all these matter and feeling love and gratitude for Her.

Integral Yoga of Sri Aurobindo and the Mother - Kireet Joshi ...

www.kireetjoshiarchives.com/sri-aurobindo.../integral-yoga-of-sri-aurobi...
Sri Aurobindo explains the meaning of Yoga in the following words: [Yoga is] a methodised effort towards self-perfection by the expression of the potentialities ...

https://www.linkedin.com/.../sri-aurobindo-foundation-for-integral-mana...
Learn about working at Sri Aurobindo Foundation For Integral Management (SAFIM), A Centre of Excellence in Management. Join LinkedIn today for free.


The economic scene today is going through a major upheaval with existing paradigms not producing the desired results. We are realizing more and more that no amount of fiddling with outer structures or systems is going to solve the problems. Since the root causes are within us, only a change in our attitudes, values, consciousness, can bring about a lasting solution.
The ‘Sri Aurobindo Foundation for Integral Management’ (SAFIM) is a Centre of Excellence in Management. Established by Sri Aurobindo Society, Puducherry, Institute strives for an integral approach to management, in all its multiple dimensions, based on a deeper vision of life.

www.spuvvn.edu › Academics › Academic Chairs
SR. NO. Name of the Chair/Centre, Date of Establishment, Name of Director/Chairperson, Date of Funding Agency, Amount of Endowment Rs. Date of ...
Our ideal is not the spirituality that withdraws from life but the conquest of life by the power of the spirit. It is to accept the world as an effort of manifestation of the Divine, but also to transform humanity by a greater effort of manifestation than has yet been accomplished, one in which the veil between man and God shall be removed, the divine manhood of which we are capable shall come to birth and our life shall be remoulded in the truth and light and power of the spirit.

Remembering Sri Aurobindo and the Mother: The Forgotten ...

www.oxfordscholarship.com/.../acprof-9780199938704-chapter-03
This chapter attempts to rectify the neglect of Sri Aurobindo in studies of modern yoga ... Sri Aurobindo and the Mother: The Forgotten Lineage of Integral Yoga  ...

www.aurovalley.com/integral-yoga/sri-aurobindo-the-mother
SRI AUROBINDO was born in Calcutta on August 15, 1872, and was taken to ... settled permanently and concentrated on the development of the Integral Yoga.